It's been a while since I've posted about Chaotica's forthcoming GPU acceleration support, and there's some exciting recent progress that's definitely worth sharing!

Chaotica's GPU acceleration is based on OpenCL, and therefore supports a large variety of different hardware, notably AMD GPUs (that do not support CUDA) and also both Intel and AMD CPUs. This is great because it means you don't have your CPU sitting idle while the GPU renders, instead it happily helps out with the heavy burden of high quality fractal rendering :) Some newer CPUs have built-in GPUs, and these are fully exploited too; for example Intel's i7 "Haswell" processors have an excellent built-in GPU that is competitive with many mid-range stand-alone GPUs.

In the last few days Chaotica's GPU rendering engine has been extended to support multi-GPU rendering, and it works quite well already! Here's a recent screenshot from a Windows PC with 4 OpenCL devices: the normal CPU cores, the CPU's built-in GPU, an AMD FirePro W5000 workstation GPU and an NVIDIA GeForce GTX 750 Ti: 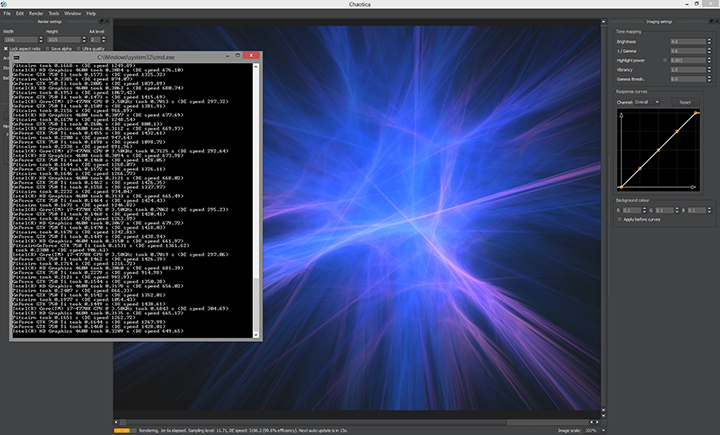 Using all available compute resources on a modern multi-GPU computer

A reasonably good DE speed for a modern quad-core computer is about 300-500, and here we see Chaotica getting a DE speed of over 3000! The GPUs are all working perfectly in parallel, so you can probably reach some ridiculous speeds with high-end GPUs, instead of the mid-range ones used in this test system. This performance boost can't come too soon, since rendering HD animations is a taxing process for almost any computer.

Apple's new Mac Pro, with its dual D700 GPUs and fast Xeon CPU, is an excellent performer too, and we'll be showing off its rendering prowess soon in a mini-feature.

Currently there are a lot of features missing from the GPU render engine, besides most of the transform library, however it's coming along well and we will hopefully be able to demo the GPU support at the upcoming Fractal Art Symposium in Spain.

Stay tuned for more updates on our Facebook page!