Located on the right side of the main window, starting with brightness and ending with background color. Changing imaging settings does not restart your render, so you can experiment with them as your render progresses. These settings are saved with your parameters in .chaos files. 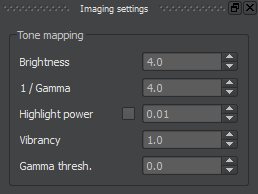 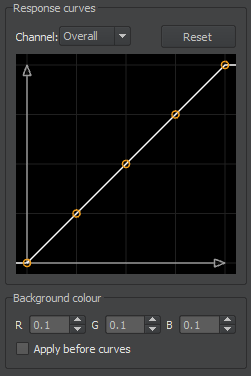 Chaotica has five response curves which can be used to drastically alter the colors of a render. The overall curve essentially acts as a pre-gain, affecting all three color channels. The single-channel curves are applied after this overall adjustment. Finally, the alpha channel is independent of these, instead adjusting the transparency of the fractal against the background.

On these curves, the x-axis represents the input and the y-axis represents the output, as is standard in most image-editing software. Raising the right node will brighten the highlights and lowering the left node will darken the lowlights, creating contrast. To zoom in or out on a curve, hold alt, right click the curve area, and drag. New nodes can be added by clicking on the curve and dragging.